Discount is a reduction given on marked price.
Discount = Marked Price – Selling price.

Discount can be calculated when the discount percentage is given.
Discount = Discount % of marked Price.

Additional expenses made after buying an article are included in the cost price and are known as overhead expenses.
C.P = Buying Price + Overhead expenses

Sales tax is charged on the sale of an item by the government and is added to the bill amount.
Sales tax = Tax % of bill amount

VAT (value added tax) is charged on the selling price of an article.

Percent: The word percent is an abbreviation of the Latin phrase ‘per centum’ which means per hundred or hundredths. 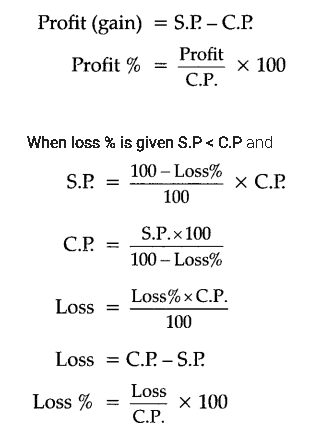 (a) When interest is compounded annually, then Selling Price: The price at which an item is sold is called its selling price. It is written in short as SP.

Overall Loss:
Overall loss = Combined CP – Combined SP.
Note: We need to find the combined CP and SP to say whether there was an overall profit or loss.

Compound Interest
Interest: Interest is the extra money paid by institutions like banks or post offices on money which is deposited (kept) with them. Interest is also paid by people when they borrow money. The money deposited or borrowed is called the principal. Interest is generally given in per cent for a period of one year.

Simple interest (SI): The interest is called simple when the principal does not change.

The formula for Simple Interest: Simple interest on a principal of ₹ P at R% rate of interest per year for T years is given by 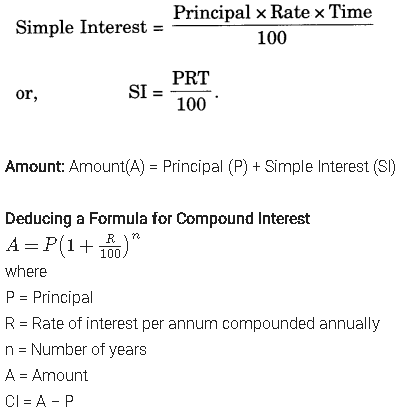 Rate Compounded Annually or Half Yearly (Semi-Annually)
The word annually mentioned after the rate means that the interest is charged at the end of every year, whereas the rate is given for one year.