No questions yet
Describe what you're trying to achieve and where you're getting stuck
Ask a New Question
Lesson: Chapter 1 Food Where Does It Come From
About Lesson

Food is needed by all living beings for four main purposes:

If a person does not get food, she/he feels weak and is likely to fall ill.

There is a wide range of food items eaten across various states of India. Different organisms eat different kinds of food.

Our food comes from different sources. We get food from plants as well as animals.

We eat animals (as meat) as well as their different products like milk, eggs and honey.

Cooked food can be easily consumed and absorbed by our body. Cooking also kills the harmful germs.]

Ingredients: Materials needed to prepare a dish or food are called its ingredients.

Edible parts: Those parts (of a plant) which are eatable are called Edible parts

Nectar: Sweet juices found in flowers are known as nectar.

Let us see what Mrs Iyer and Mrs Kapoor have prepared. Have they prepared the same kind of food? List out the six food items that you see on their table. We get all these food from both plants and animals. Thus, plant parts and animal products are our sources of food.

Food From Plants:
Green plants are known as producers because they prepare their own food. They use light, air (carbon dioxide), water, and chlorophyll (present in their leaves) to prepare their food by the process of photosynthesis.

Different plant parts serve as sources of food for us. Fruits, vegetables, cereals, and pulses that we eat are obtained from different parts of a plant. Stems of certain plants are eaten. For example, the stem of sugarcane plant is eaten and is also used to make sugar. The stem and flower of the banana plant is cooked and eaten in different parts of India. Certain plants have underground stems that we eat. Examples are potato, onion, garlic, and ginger (Fig. 1.2). Flowers of certain plants like cauliflower, broccoli, and banana are also eaten (Fig. 1.4). Seeds Pulses like mung bean, kidney bean, chickpea, and cereals (wheat, maize, and rice) that we eat are seeds of plants (Fig. 1.5). Wheat grains are ground to make flour (atta) which is used to make chapattis. Cumin seeds, pepper, and cardamom that we eat as spices are also seeds of different plants.

Sprouted seeds (or sprouts) of mung bean and chickpea (Bengal gram) are very nutritious. Sprouting involves soaking seeds and draining the water and then leaving them till they germinate. Sprouts can be eaten raw as salads or cooked.
Fruits and vegetables Plants also provide us fruits and vegetables (Fig. 1.6).

Like different plant parts, animal too serve as sources of food. Let us learn about the main food products obtained from animals.

Egg Hen’s egg is the most common bird egg eaten in the world. It is a rich source of proteins and vitamins. Some people also eat eggs of goose and duck.

Honey: Honey is a sweet liquid made by bees from the nectar of flowers (Fig. 1.8). 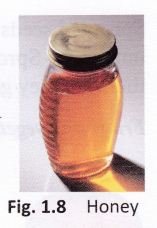 Honey is collected from beehives. It is used in cooking and also has medicinal value.

Milk: Milk is obtained from animals like cow, buffalo, and goat. Fig’1-8 Honev It is a very nutritious food item and is a rich source of proteins. Milk also contains calcium, which is required for proper bone growth and nerve function (Fig. 1.9).

Paneer (cottage cheese): Common methods of making paneer include adding lemon juice or vinegar to milk. Then, the liquid portion of milk is drained off and the solid part forms paneer. This process is called curdling.

Cream: Cream is made by collecting the top fatty layer of the milk.

Butter: Butter is made by churning fresh cream.

Ghee: Ghee is made by gently heating butter and removing the solid matter.
Curd Common methods of making curd include adding a small sample of curd in warm milk. The microorganisms (bacteria) present in the curd sample turn the milk into curd.

Unlike green plants, animals cannot make their own food. They depend on plants and other animals for food.
People living in deserts also drink camel’s milk. In ice-cold places, people mostly have yak’s milk.

Let’s Remember
Write two examples for each of the following.

What Do Animals Eat:
Different animals have different feeding habits. Based on their feeding habits, animals can be divided into three groups: herbivores, carnivores, and omnivores.

Herbivores
Herbivorous animals (Fig. 1.11) or herbivores (herbi, plant; vore, eater) are those that eat only plants and plant products. Cow, deer, horse, giraffe, squirrel, and butterfly are examples of herbivores. Carnivores
Carnivorous animals (Fig. 1.12) or carnivores (carni, meat; vore, eater) are those that only eat the flesh of other animals. Lion, tiger, jackal, vulture, owl, eagle, snake, and spider are examples of carnivores.

Omnivores
Omnivorous animals (Fig. 1.13) or omnivores (omni, all; vore, eater) are those that eat both plants and flesh of other animals. Bear, racoon, crow, and human beings are examples of omnivores. Scavengers and Decomposers
Instead of hunting live animals, some birds and animals eat the flesh of other animals that are already dead.
Vulture is one such bird. These animals or birds are called scavengers. Some other organisms feed on and destroy (or decompose) dead plants and animals. Fungi
and bacteria are examples of such organisms (Fig. Fjg 114 Fung.1.14). These organisms are called decomposers. Together with scavengers, decomposers play a very important role in nature. Without these organisms, our planet would be covered with dead plants and animals.

Herbivore: An animal that eats only plants and plant products is called a herbivore.

Carnivore: An animal that eats only the flesh of other animals is called a carnivore.

Omnivore: An animal that eats both plants and flesh of other animals is called an omnivore.

Scavenger: An animal that eats only the flesh of animals that are already dead is called a scavenger.

Decomposer: An organism that feeds on and decomposes dead animals and plants is called a decomposer.

Herbivores have wide blunt teeth that help them to grind and chew plants.

Carnivores have sharp teeth and claws that help them to tear flesh.