1. To walk through a waterlogged area, you usually shorten the length of your dress by folding it. Can this change be reversed?
Ans: Yes, it can be reversed by unfolding the dress.

2. You accidentally dropped your favourite toy and broke it. This is a change you did not want. Can this change be reversed?
Ans: No, this change (breaking of toy) cannot be reversed.

3. Some changes are listed in the following table. For each change, write in the blank column, whether the change can be reversed or not.

4. A drawing sheet changes when you draw a picture on it. Can you reverse this change?
Ans: No, we cannot get fresh drawing sheet once a picture is drawn on it with paint/ oil or water. However, we can reverse the change, if soft pencil is used to draw the picture.

5. Give examples to explain the difference between changes that can or cannot be reversed.
Ans: Examples of reversible and irreversible changes 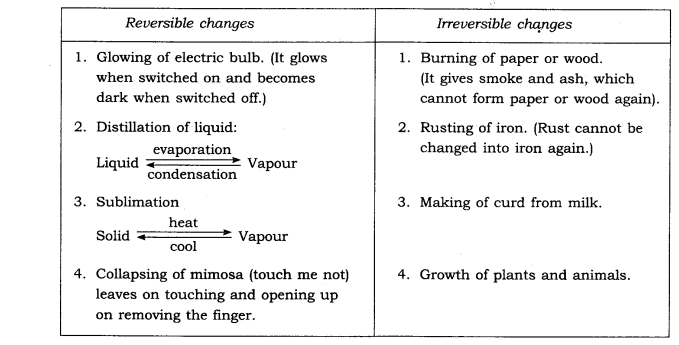 7. A bag of cement lying in the open gets wet due to rain during the night. The next day the sun shines brightly. Do you think the changes, which have occurred in the cement, could be reversed?
Ans. No, these are irreversible chemical changes.

1. Give two examples of slow changes.
Ans:
(a) Growing of plants
(b) Ripening of fruits.

2. Give two examples of fast changes.
Ans:
(a) Blowing of balloon
(b) Rolling out roti from dough ball.

3. Give two examples of reversible changes.
Ans:
(a) Drying of wet clothes
(b) Heating of milk.

4: Give two examples of irreversible changes.
Ans:
(a) Milk to cheese
(b) Cooking of food.

6. Does the size of the paper change after making an aeroplane by folding it or by cutting it?
Ans: Yes.

7. Can you change the shape of a eraser after erasing?
Ans: Yes.

12. Write some changes happening in our body.
Ans:
(a) Our nails grow
(b) Our hair grows
(c) We grow taller
(d) Our weight increases.

13. Some common changes are given in Table 6.1. Which of these changes do you think can be reversed? 1. What is a physical change? Explain with example.
Ans: The changes in which only physical properties of substances are changed and no new substance is formed is called physical change. It is a reversible change. Example: Boiling and freezing of water. 2. How does curd being set? Is this change reversible?
Ans: A small quantity of curd is added to warm milk. The milk is stirred and is set aside undisturbed for a few hours at a warm place. In a few hours, the milk changes into curd.
Curd formed from milk cannot be changed into milk again. So, this an irreversible (cannot be reversed) change.