The Stars and the MOON are celestial bodies which are visible only at night in the sky. During daytime, the power of the sun’s light renders them invisible.

The moon appears differently on different nights—like the Full Moon only once a month, on the poornima night whereas on the fifteenth night after that, there is no moon in the sky (amavasya).

Some celestial bodies are big and hot since they are made of gases. They are called Stars. The sun is also a star. We do not feel the heat and light of the stars other than the sun since they are very far away from us.

Groups of stars that are visible in definite patterns are called Constellations. Ursa Major (the Big Bear), The Small Bear (Saptarishi), etc are some well-known constellations.

The Pole Star is known to retain the same position every night in the sky. It is also called the North Star since it helps in knowing the North direction. 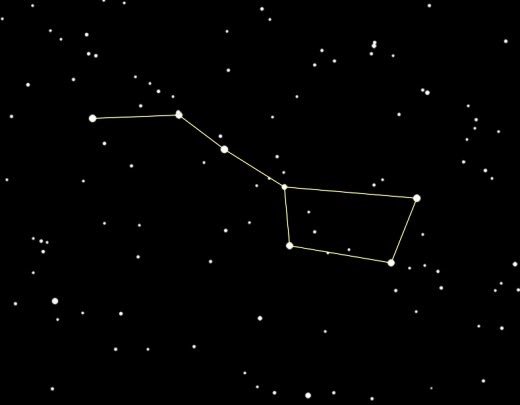 The earth and moon are part of a bigger system (or family) of celestial-bodies, called the Solar System. The sun is the “head” of this system and is present at its centre. The planets revolve around the sun, while the satellite revolves around the placets. The planets, in addition to revolving around the sun, also rotate about their own axis.

The sun is made of extremely hot gases, and it provides heat and light to the rest of the solar system. It is about 150 million kilometres away from the earth.

All the planets of the solar system are listed below: (in the order of their distance from sun)

Mnemonic:
to memorise the names of the eight planets in the order of their distance from the sun
My Very Efficient Mother Just Served Us Nuts
where the beginning of each word is the same as the first letter of the planet existing at that position in the order (check the list above)

Till August 2006, Pluto was also a planet. But it is now recognised as a “dwarf planet”.

The shape of the earth is called a Geoid. This means it is not perfectly spherical, since it is flattened at the poles. The earth is probably the only planet that can support life. This is because its temperature, resources like water and oxygen, etc are present in the proportions appropriate for life. The earth, with its 2/3 rd of surface covered with water, appears blue from space and is called Blue Planet.

The Moon’s diameter is 1/4 th of that of the earth. It is 3,84,400 km away from earth. It completes a revolution around the earth in about 27 days. Incidentally, it also takes around the same time for a rotation about its own axis. It does not support life.

There are several other tiny bodies in space (the Asteroids) that move around the sun. There is a “belt” of such objects, called the Asteroid Belt, between Mars and Jupiter.

There exist small pieces of rocks (Meteroids) which also move around the sun.
The Milky Way is the galaxy (a huge system of billions of stars) we live in. The Milky Way is further a part of a bigger collection of galaxies, called the Universe, (refer Flow¬Learning)

Celestial Body: An object in the universe (but not on the earth) is said to be a celestial body. Examples are sun, earth, moon, stars, etc.

Star: A celestial body that is characterized by being very hot and big, and made of gases is a star. A star typically has its own heat and light.

Full Moon Night: A night when the moon is visible from the earth as a full sphere is called the Full Moon night, and it occurs once a month.

New Moon Night: The fifteenth night after the Full Moon night, when the moon is not visible at all in the sky, is called the New Moon night.

Constellation: A group of several stars which can usually be recognized by a definite pattern is called a constellation. An example is Ursa Major.

Planets: A celestial body which revolves around a particular star in an orbit, and gets all its light from that star, is called a planet. Earth is a planet.

Satellites: A celestial body which revolves around a planet in a particular orbit is called a satellite. The moon is a satellite of the Earth. Sun: The Sun is a star that acts as the “head” of the solar system and around which all planets revolve: Note that the sun is not at the center of the orbit, instead it is like in the figure above.

Inner Planets: The Inner Planets are the planets that orbit around the sun between the sun and the asteroid belt, that is, are close to the sun. These are: Mercury, Venus, Earth and Mars.

Outer Planets: The Outer Planets are the planets that orbit the sun beyond the asteroid belt, that is, are very far away from the sun. These are: Jupiter, Saturn, Uranus and Neptune.

Geoid: The shape of the earth is called a geoid. A geoid is spherical except for the flattening at two places diametrically opposite to each other.

Poles: The two places diametrically opposite to each other and which lie on the axis about which a spherical body rotates are called poles.

Asteroids: A large number of tiny celestial bodies which move around the sun, and are mainly present in a belt between the orbits of Mars and Jupiter, are called Asteroids.

Meteoroid: Small pieces of rocks which move around the sun are called meteoroids.

Galaxy: A galaxy is a collection of innumerable stars. Most stars have their own families like the solar system. The Milky Way is the galaxy in which we live.

Universe: The Universe is the largest unit in which we live. It is a collection of galaxies. There is only one Universe and everything that exists in this Universe itself.