2. State whether the following statements are true or false:
(i) A cylindrical magnet has only one pole.
(ii) Natural magnets were discovered in Greece.
(iii) Similar poles of a magnet repel each other.
(iv) Maximum iron filings stick in the middle of a bar magnet when it is brought near them.
(v) Bar magnets always point towards North-South direction when suspended freely in air.

4.  Column I shows different positions in which one pole of a magnet is placed near that of the other. Column II indicates the resulting action between them for each situation. Fill in the blanks.

6. Where are poles of a bar magnet located?
Ans: Poles are located at the ends of bar magnet just before the ends. These are north and south poles.

8. You are given iron strip. How will you make it into a magnet?
Ans:  Making a magnet: Take an iron strip and place it on the table. Now take a bar magnet and place one of its poles near one edge of the strip of iron. Without lifting it move it along the length of the iron strip till you reach the other end. Now lift the magnet and bring the pole to the same point of strip from where yob began. Repeat this process about 30-40 times. Bring some iron fillings near the strip and observe that the strip attracts the fillings. This indicates that the iron strip becomes magnet.
Remember that the pole of magnet and direction of its movement should not change. 9. How is compass used to find direction?
Ans: A compass is a small case of glass. A magnetised needle is pivoted inside the box. The needle can rotate freely. Compass also has a dial with directions marked on it. The compass is kept at the place where we want to know the directions. When the needle comes to rest it indicates north-south direction. The compass is then rotated until the north and south marked on the dial are at the two ends of the needle. Usually different colours are used to point the ends of needle to identify the north and the south poles. 10. A magnet was brought from different directions towards a toy boat that has been floating in water in a tub. Effect observed in each case is stated in Column I. Possible reason for the observed effects are mentioned in Column II. Match the statements given in Column I with those in Column II.

2. Name the shepherd after which magnet was named.
Ans: Magnets.

4. At which place on a magnet, its magnetic force is maximum?
Ans: At poles.

5. In which direction does a suspended magnet come to rest?
Ans: Magnet comes to rest in N-S (north-south) direction.

1. Draw the diagram of (a) Bar magnet (b) Horse-shoe magnet.

2.Identify magnetic and non-magnetic substances from the list given below: Iron, Steel, Nickel, Plastic, Wood, Copper and a Stainless Steel spoon
Ans:

3. Draw a diagram of a magnetic compass.
Ans: 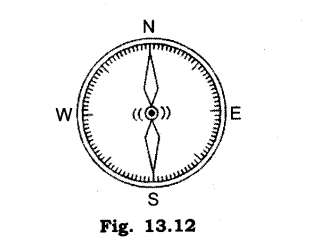 4. Write main properties of a magnet.
Ans: (i) Magnet has two poles—south pole and north pole.
(ii) Poles of magnet cannot be isolated.
(iii) Like poles repel each other and unlike poles attract each other.
(iv) Freely suspended magnet aligns in N-S direction.

5.Write two methods by which a magnet can be demagnetised.
Ans: (1) By hammering the magnet strongly.
(2) By heating a magnet strongly and keeping it in the east-west direction.

8. It is said that repulsion is a sure test for magnetism. Why is it so?
Ans: To identify the magnet, repulsion (like poles of two magnets repel) is the only test which will let you know whether the given rod is an iron rod or a bar magnet. Because a magnet attracts an iron object and unlike poles of magnets also attract each other.

9. A given bar magnet was broken into pieces. Where will be its North and South pole? Ans: If you cut a bar magnet into pieces then the end labelled as North remains north and the other end formed will be south. Similarly the end that was pointing south will be south pole and its opposite end will be the new north pole.

10. You are given two rods. Out of these, one is an iron rod and the other one is magnet, how will you identify these rods?
Ans: Take both the rods and suspend them separately. Bring one end of a bar magnet close to both the ends of the suspended rod. If it shows attraction at both the ends then it is an iron rod. If it shows attraction at one end and repulsion at the other end then it is a bar magnet.

1. Show that a magnet has two poles. What are the properties of the poles of a magnet?
Ans. We know that pole is the point where the strength of the magnet is maximum. So more and more iron particles will be attracted at poles of a magnet when we bring a magnet near the iron particles. We will observe the crowdness of particles at the ends of magnet. This indicates the presence of two poles in a magnet. Hence poles are present in a magnet in pair. If a magnet is divided into two parts, each part also possesses a pair of poles.