Q.1.Classify the changes involved in the following processes as physical or chemical changes:
(a) Photosynthesis
(b) Dissolving sugar in water
(c) Burning of coal
(d) Melting of wax
(e) Beating aluminium to make aluminium foil
(f) Digestion of food

Q.3.Fill in the blanks in the following statements:
(a) When carbon dioxide is passed through lime water, it turns milky due to the formation of .
(b) The chemical name of baking soda is .
(c) Two methods by which rusting of iron can be prevented are __________ and __________
(d) Changes in which only ____________ properties of a substance change are called physical changes.
(e) Changes in which new substances are formed are called _____________ changes..
Ans. (a)calcium carbonate
(b) sodium hydrogen carbonate
(c) painting or greasing, galvanisation
(d) physical
(e) chemical

It is a chemical change

Q.7. Explain why burning of wood and cutting it into small pieces are considered as two different types of changes. ~
Ans. Burning of wood is a chemical change because in burning new substances are formed as
Wood + Oxygen ———–> Charcoal + Carbon dioxide + Heat + Light
But cutting it into small pieces is physical change because no new substance is formed. We can only reduce the size of wood. Question 1.
What kind of change is shown by tearing of paper? [NCERT Exemplar]
Answer:
Tearing of paper is a physical change although, it cannot be reversed.

Question 10.
What is the nature of magnesium oxide solution?
Answer:
Magnesium oxide is basic in nature because it turns red litmus solution to blue.

Question 11.
Name the process by which common salt is obtained from sea water.
Answer:
The common salt can be obtained by the evaporation of sea water.

Question 16.
Write word equations for two chemical reactions with the help of materials given in the box.

Question 2.
Explain the following.
(a) Lime water turns milky on passing carbon dioxide gas through it.
(b) Bubbles are produced when acetic acid is added to a solution of sodium hydrogen carbonate. [NCERT Exemplar]
Answer:
(a) Carbon dioxide gas produced in the reaction passing through freshly prepared lime water as shown in figure. The reaction between lime water and carbon dioxide gas is a chemical change because a new substance calcium carbonate is formed during this change. The turning of lime water into milky is a standard test of carbon dioxide.
(b) When baking soda (sodium hydrogen carbonate) and vinegar (acetic acid) are mixed together, then a chemical change takes place between sodium hydrogen carbonate and acetic acid to form three new substances.
The change in the test tube is as follows: 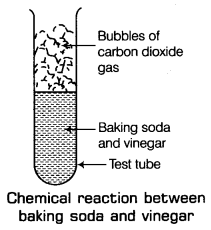 Question 11.
Which type of change takes place in the following and state whether the energy is evolved or absorbed during the change?
Burning of a candle, lightning of a bulb, preparation of food by green plants, volcanic eruption, evaporation of petrol, burning of LPG.
Answer:

Question 15.
A student took a solution of copper sulphate in a beaker and put a clean iron nail into it and left it for about an hour.
(a) What changes do you expect?
(b) Are these changes chemical in nature?
(c) Write a word equation for the chemical change, if any. (NCERT Examplar]
Answer:
(a)

(b) The changes are chemical in nature as new substances, iron sulphate (green) and copper (brown) are formed.

Question 16.
Describe two changes that are harmful. Explain why you consider them harmful? How can you prevent them?
Answer:
Harmful changes are

Rusting of iron is harmful because it slowly destroys iron articles and makes them useless. Since, iron is used in making large number of objects or articles such as bridges, grills, railings, gates and bodies of cars, buses, trucks and ships, etc. Rusting of iron causes a great loss over a period of time.
Prevention Rusting can be prevented by oiling, greasing or painting. It can also be prevented by galvanisation.
Decaying of fruits causes health hazards. Due to decaying of fruits, there is a lot of monetary loss in food industry.
Prevention Fruits can be preserved by keeping them at low temperature and by using some specific preservatives.

Question 1.
Give an example of a chemical reaction for each of the following situations: [NCERT Exemplar]
(a) A change in colour is observed.
(b) A gas is evolved.
(c) Sound is produced.
Answer:
(a) Chemical reaction between copper sulphate solution and iron metal. In this reaction, blue colour of copper sulphate solution changes to light green colour due to the formation of iron sulphate.

(b) When baking soda and vinegar are mixed together then a chemical change takes place and bubbles of carbon dioxide gas are formed along with some other substances.

Question 2.
Rahul was a student of Class VII. His father purchased a new bicycle for him on his birthday. After few months, he found that the cycle chain and even the handle gets rusted. His father advised him to apply a coating of paint to the cycle and not to keep it in the open in future.
Now, answer the following questions:
(a) Why his cycle gets rusted?
(b) What do you mean by rusting of iron?
(c) What values are shown by Rahul’s father? [Value Based Question]
Answer:
(a) Rahul’s cycle was kept in the open for a longer time. As air contains both oxygen and moisture. Thus, in the presence of oxygen and water, his cycle slowly gets rusted.
Iron(Fe) + Oxygen + Water →Rust (Iron oxide)
(b) If iron objects are left in humid conditions for a longer time, they get covered with reddish brown ferric oxide (Fe2O3) layer. This is called rusting of iron.
(c) Rahul’s father is caring, aware and intelligent.

Question 3.
In the summer holidays, Karan went to Rann of Kutch in Gujarat with his parents. Karan was aware that in the coastal regions of India especially in the Rann of Kutch common salt is obtained from sea water. Karan was very excited to see that place. He requested his father that he want to see the process of obtaining salt from sea. His father helped him and they went to see the place where common salt was collecting.
And he also explained the whole process. Karan was very happy to see the process.
Now, answer the following questions.
(a) How is common salt obtained from sea water?
(b) Name the process by which salt is collected from sea water.
(c) What values are shown by Karan? [Value Baaad Question]
Answer:
(a) Sea water is collected in shallow pits. It is then allowed to evaporate in the sun. As, the water evaporates, the salt solution becomes supersaturated (concentrated). This supersaturated solution cannot hold the excess salt. Thus, it separates out in the form of salt crystals. These salt crystals are collected and are redissolved in water and filtered to remove insoluble impurities. The clear solution is again evaporated to obtain the crystals of pure salt.
(b) Salt is obtained from sea water by the process of evaporation.
(c) The values shown by Karan are curious, aware and intelligence.

Question 4.
When baking soda is mixed with vinegar, bubbles are formed with the evolution of a gas. Name the gas evolved. What happens when this gas is passed through lime water? [HOTS]
Answer:
When baking soda (sodium hydrogen carbonate) and vinegar (acetic acid) are mixed together, then a chemical change takes place between sodium hydrogen carbonate and acetic acid to form three new substances.
The change in the test tube is as follows:

The reaction between lime water and carbon dioxide gas is a chemical change because a new substance calcium carbonate is formed during this change. The turning of lime water into milky is a standard test of carbon dioxide.

When baking soda (NaHC03) reacts with vinegar which contains acitic acid carbon dioxide comes out, which turns lime water milky, therefore it is a chemical change. In all these activities, we saw that in each change, one or more new substances are formed. When magnesium ribbon was burnt, the ash was the new substance formed.

The reaction of copper sulphate with iron produced two new substances, i.e. iron sulphate and copper. Vinegar and baking soda together produced carbon dioxide which turned lime water milky. So, all those changes in which one or more new substances formed, are called chemical changes. These are permanent changes which can usually not be reversed to form the original substance.

It is a permanent change which cannot be reversed back.
So, rusting of iron is a chemical change.

(d) Two other examples are

Multiple Choice Questions
Question 1.
Which of the following is a physical change? [NCERT Exemplar]
(a) Rusting of iron
(b) Combustion of magnesium ribbon
(c) Burning of candle
(d) Melting of wax
Answer:
(d) Melting of wax

Question 7.
Galvanisation is a process used to prevent the rusting of which of the following?
(a) Iron
(b) Zinc
(c) Aluminium
(d) Copper
Answer:
(a) Iron

True/False
1. When a candle bums, both physical and chemical changes take place. [NCERT Exemplar]
2. Anaerobic bacteria digest animal wastes and
3. Ships suffer a lot of damage though they are painted.
4. Stretching of rubber band is not a physical change. [NCERT Exemplar]
5. Cooking of rice is a physical change.
6. Within our bodies, food is digested due to chemical reaction.
7. A blue deposit is formed on an iron nail when dipped in copper sulphate solution.
8. Both moisture and air are essential for rusting.
9. Formation of clouds is a physical change.
10. The colour of iron sulphate solution is green.
Answers:
1. True
2. True
3. True
4. False
5. False
6. True
7. False
8. True
9. True
10. True