Let’s Understand what are Characteristics of solid-state

The State of Solid: Solid is Classified into two categories:- Difference between crystalline and Amorphous Solid

:- Anisotropic Properties:- It can be defined as a difference in material’s physical or mechanical properties (like refractive index, conductivity, tensile strength) in different direction.

Crystalline solids are anisotropic in nature. This anisotropy in crystals is due to different arrangement of particles along different direction. Isentropic :- Amorphous solids are isotropic in nature. It is because there is no long range order in them and arrangement is irregular along all the direction so value of any physical properties would be same along any direction.

Q. Why are solids rigid? (NCERT Book)
Ans: The constituent particles in solids have fixed positions and can oscillate about their mean positions. Hence, they are rigid.

Q. Why is glass considered as super cooled liquid ? (C.B.S.E. Delhi 2013) (NCERT Book)
Ans: Glass is considered to be super cooled liquid because it shows some of the characteristics of liquids, though it is an amorphous solid. For example, it is slightly thicker at the bottom. This can be possible only if it has flown like liquid, though very slowly.

Q. Define the term ‘amorphous’. Give a few examples of amorphous solids.(NCERT Book)
Sol. Amorphous solids are those substances, in which there is no regular arrangement of its constituent particles, (i.e., ions, atoms or molecules). The arrangement of the constituting particles has only short-range order, i.e., a regular and periodically repeating pattern is observed over short distances only, e.g., glass, rubber, and plastics.

Q. What makes glass different from a solid such as quartz? Under what conditions could quartz be converted into glass?(NCERT Book)
Sol. Glass is a supercooled liquid and an amorphous substance. Quartz is the crystalline form of silica (SiO2) in which tetrahedral units SiO4 are linked with each other in such a way that the oxygen atom of one tetrahedron is shared with another Si atom. Quartz can be converted into glass by melting it and cooling the melt very rapidly. In the glass, SiO4 tetrahedra are joined in a random manner.

Ans. Crystalline solid are anisotropic in nature. This anisotropy in crystals is due to different arrangement of particles along different direction. 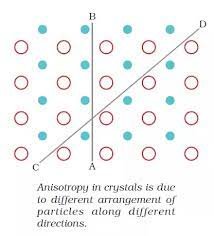 Ans. For Answer see above.

Q. Refractive index of a solid is observed to have the same value along all directions. Comment on the nature of this solid. Would it show cleavage property?
Ans: As the solid has same value of refractive index along all directions, it is isotropic in nature and hence amorphous. Being amorphous solid, it will not show a clean cleavage and when cut, it will break into pieces with irregular surfaces.