No. Atoms in Unit Cell:- In a face-centered cubic (fcc) unit cell the atoms are present in the corners and at the center of all the faces of the cube.

Each atom present at the face-center is shared between two adjacent unit cells and only a ½ of each atom belongs to a unit cell. 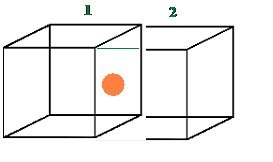 In solids, these constituent particles are closely-packed that leaves minimum vacant space. let the unit cell edge length be ‘a’ and face diagonal AC = b.

Q. Aluminium crystallises in FCC structure. Atomic radius of metal is 125 pm. what is the lenght of the side of unit cell of the metal? [CBSE 2013] (i) In metals, conductivity strongly depends upon the number of valence electrons available in an atom. The atomic orbitals of metal atoms form molecular orbitals which are so close in energy to each other, as to form a band. If this band is partially filled or it overlaps with the higher energy unoccupied conduction band, then electrons can flow easily under an applied electric field and the metal behaves as a conductor.

If the gap between valence band and next higher unoccupied conduction band is large, electrons cannot jump into it and such a substance behaves as insulator.