Question 1.
Can a moving body have relative velocity zero with respect to another body? Give an example.
Answer:
Yes, two trains running on two parallel tracks with the same velocity in the same direction.

Question 2.
Can there be motion in two dimensions with acceleration in only one dimension?
Answer:
Yes, projectile motion.

Question 3.
Is it true that a body is always at rest in a frame that is fixed to the body itself?
Answer:
Yes.

Question 4.
Tell under what condition a body moving with uniform velocity can be in equilibrium?
Answer:
When the net force on the body is zero.

Question 6.
Can an object be accelerated without speeding up or slowing down? Give examples,
Answer:
Yes, circular motion.

Question 7.
Is it possible to have the rate of change of velocity constant while the velocity itself changes both in magnitude and direction? Give an example.
Answer:
Yes, in projectile motion.

Question 8.
Which motion is exactly represented by Δs = vΔt?
Answer:
It Represents motion with uniform velocity.

Question 10.
What is common between the two graphs shown in figs, (a) and (b)?
Answer:

Both these graphs represent that the velocity is negative.

Question 11.
What is common between the two graphs shown in figs, (a) and (b)?
Answer:

Both these graphs represent that velocity is positive.

Question 12.
What is meant by a point object in Physics?
Answer:
An object is said to be a point object if its dimensions are very small as compared to the distance covered by it.

Question 13.
The displacement of a body is zero. Is the distance covered by it is necessarily zero?
Answer:
No.

Question 14.
Which of the velocity or speed is measured by the speedometer of a vehicle?
Answer:
Speed.

Question 15.
Can you think of a situation where a body falling under gravity has constant velocity? Give example.
Answer:
Yes, the terminal velocity of a body.

Question 16.
Give an example of a motion which even though is accelerated motion yet it is called uniform motion.
Answer:
Uniform circular motion.

(b) A lizard moving on a wall in a room.
Answer:
Two-dimensional motion.

(c) Kite flying in the sky.
Answer:
and

Question 18.
When is the average velocity over an interval of time becomes equal to instantaneous velocity?
Answer:
When the velocity is constant.

Question 19.
A coolie carries a bag of luggage from one side of a platform to another side on the same platform. How far vertically the load is shifted?
Answer:
Zero.

Question 24.
Define the speed of the object.
Answer:
The speed of an object is defined as the distance covered by it per unit of time.

Question 26.
Can a body have zero velocity and still accelerating?
Answer:
Yes.

Question 27.
Can the direction of the velocity of a body change, when acceleration is constant?
Answer:
Yes.

(b) on its downward motion?
Answer:
Both velocity and acceleration are vertically downward.

Question 33.
Following two equations represents the x – t relation for the motion of an objects.
x (t) = x(0) + v(0)t + 1/2 at2
and x(t) = v(0)t + 1/2 at2
What is the difference between them?
Answer:
The first equation is a more general form of motion as it contains information regarding the initial position of the object.

Question 35.
If the instantaneous velocity of a particle is zero, will its instantaneous acceleration be necessarily zero?
Answer:
No.

Question 36.
What is the shape of the displacement time graph of a particle having an average velocity equal to its instantaneous velocity?
Answer:
In this case, the velocity is uniform, so the x – t graph is a straight line.

Question 40.
Define a point object.
Answer:
It is defined as an object having dimensions (length, breadth, thickness etc.) very small as compared to the distance covered by it.

Question 41.
Is the following graph possible for the motion of a particle moving along a straight line?

Question 42.
Explain why the graph in the above question is not possible?
Answer:
This is because the speed for a given time is negative and speed is always positive.

Question 43.
Why the following graph is not possible for the motion of a particle moving along a straight line?

Answer:
This is because here the path length decreases with time while it must either increase or must remain constant.

∴ Time after which they meet = 2h. 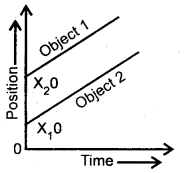 Question 6.
A ball is thrown vertically upward with a velocity of 20 ms-1. It takes 4 seconds to return to its original position. Draw a velocity-time graph for the motion of the ball and answer the following questions:
At which point P, Q, R, the stone has :
(a) reached its maximum height.
(b) stopped moving?
Answer:
Let P represent the initial position at the time when the ball is thrown vertically upward.
Q represents the highest point reached by the ball.
R represents the original position of the ball after 4 seconds.

Thus the velocity-time graph for the motion of the ball is as shown in Fig. 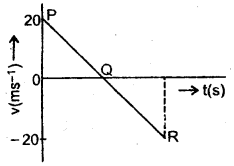 (a) We know that at the highest point, the velocity of the object is zero. So stone will reach its maximum height corresponding to point Q.

Question 11.
Explaining with an example, why does a person sitting in a train think that the other train is at rest when both are moving on parallel tracks with the same speed and in the same direction?
Answer:
This is because the relative velocity of the train in which the person is sitting w.r.t. the other train is zero.
e.g. Let two trains A and B are moving along east with a velocity of 50 km/h i.e. vA = vB = 50 kmh1.

Question 12.
Can a body be said to be at rest as well as in motion? Explain.
Answer:
Yes, both rest and motion are relative terms. A body at rest w.r.t. one object may be in motion w.r.t. another object, e.g. a person sitting in a moving train is at rest w.r.t. other passengers in the train but at the same time, he is in motion w.r.t. the surroundings (trees or buildings) on the side of the track.