Anything that has mass and occupies space is defined as matter. For example:-soap, notebook, pencil, apple, battery etc. Matter can be further classified as 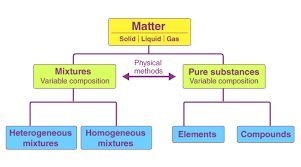 An element consists of only one type of particles. These particles may be atoms or molecules.

The properties of a compound are different from those of its constituent elements.

For example: – Hydrogen (H2) and Oxygen (O2) are gases whereas the compound formed by their combination i.e., water (H20) is a liquid.

Hydrogen burns with a pop sound and oxygen is a supporter of combustion, but water is used as a fire extinguisher.

A mixture contains two or more substances present in it (in any ratio) which are called its components.

For example:-Air, sugar solution, mixture of pulse and stone.

A mixture can be homogeneous or heterogeneous.

In homogeneous mixture, the components completely mix with each other and its composition is uniform throughout.

In heterogeneous mixtures, the composition is not uniform throughout and sometimes the different components can be observed.

For example: – Mixture of dal mot and bhujia, badam etc.

The components of a mixture can be separated by using physical methods such as simple hand picking, filtration, crystallisation, distillation etc.

Every substance has characteristic properties. These properties can be classified into 2 categories: – Physical and Chemical properties. Question of these Topics

Q. 3: What is the difference between Homogeneous and Heterogeneous Matter.(Imp.)

Q. 4: What are the Physical Properties of Matter?(Imp.)

Q. 5: What do you understand by chemical properties of matter?(Imp.)

Q. 6: Write the three points of difference between compound and mixture?(Imp.)

Q. 7: Classify the following as pure substances or mixture –